Greenemeier, Larry. “The Origin of the Computer Mouse: Now an Endangered Species, it was Crucial to the Development of Personal Computing and Internet.” Scientific American, August 18, 2009. Accessed February 20, 2017. https://www.scientificamerican.com/arti cle/origins-computer-mouse/. 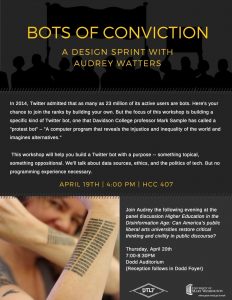 The Computer Mouse: Aglet of the Digital World from Heather Taylor on Vimeo.

The Computer Mouse: Aglet of the Digital World (Transcription)

Narrator: “When you look at this object, what is the first thing you see? The colors? The rubber sole? More than likely, you didn’t even notice the clear plastic tip at the end of the shoelace.
Narrator: “This piece may look insignificant, however, it is a vital tool that prevents the unraveling of shoe strings, and makes them easier to lace. This seemingly irrelevant piece is called an aglet. Let’s try another.”
Narrator: “What’s the first thing you notice about this object? The monitor? The keyboard? Chances are, you weren’t immediately drawn to the rounded plastic rectangle that allows you to navigate the images on your monitor with ease. Yup, you guessed it.
Narrator: “This digital rodent is none other than the computer mouse. Like the aglet, despite its mundane appearance, there is so much more to the story of the mouse than you might expect.”

Narrator: “This story involves two guys at Stanford University:Doug Engelbart and Bill English. In 1961, Doug Engelbart was doodling in his notebook at a conference about computer graphics when he suddenly had an epiphany. He immediately began sketching his idea for a new way to interact with a computer’s graphic interface. This device would feature a pair of small wheels: one that would turn horizontally and another that would turn vertically. In this way the moving wheels would plot the x and y coordinates for a cursor or “bug” on the computer screen. After drawing up the plans, Engelbart brought his ideas to his good friend Bill English, who was the mastermind behind the mechanical design for his “x,y position indicator.”

Narrator: “After both Engelbart and English looked over the plan, they both saw great potential, and wrote up a proposal for the US Air force in 1962. It wasn’t until 1963, however, that the team received funds for their “Augmentation Research Center” from both the Air Force and NASA. Engelbart, English, and the rest of the research team went to work not only on producing the handheld device that would become the computer mouse, but an entire system. Augment was a new kind of computer, featuring a text-based operating system and the ability to interact with the Graphic User Interface, or computer screen, using a specialized keyboard and a 3 button mouse. This “Augment system was featured in his 1968 demo which eventually became known as “the mother of all demos”

Narrator: “Even though the Augment system as a whole wasn’t wildly successful, tech giants such as Xerox and Apple took notice of the “x,y position indicator”. This was mainly because the entire system was focused on text-based software, whereas icon-based software was coming into vogue. In 1971, Bill English left Stanford and joined Xerox in further developing the mouse. English and Jack Hawley were able to replace the two-wheel tracking device on the bottom of the mouse with a load-bearing steel ball, which helped to make point and click navigation on icon-based systems easier. However, this change to the original design was far from perfect; there were several problems with the new “tracking ball.” These problems included a steep cost of $400 to produce a single mouse, the fact that it had to be produced by hand because of the need for extreme precision with the mouse’s internal rollers and springs, as well as the possibility for dirt to get trapped under it. All of these factors made Xerox’s design unrealistic for mass consumption by average consumers. While the Xerox team was facing roadblocks, Apple CEO and Founder Steve Jobs saw the mouse as housing great potential for marketability. He hired the 2 year old design team Hovey-Kelley to create a computer mouse that is both more affordable and easier to mass produce. Changes to the Xerox design included a floating lead ball covered in rubber, a reduction of three buttons to one, and the creation of a plastic injection-molded rib cage that would not only hold all of the internal components in the exact place, it could also be mass produced for pennies per unit once the mold was made. This mouse was designed to accompany the 1984 Macintosh and became wildly popular. Instead of costing upwards of $400 to produce a single mouse, the newest Apple design cost only $20. The Apple team had managed to achieve their original vision of an affordable, accessible mouse for the average public, and from here the mouse became a standard part of the American computer desk.”

The Future of the Mouse: 1984 and Beyond

Narrator: “Since 1984, computers have become a key part of our everyday lives. As their designs have improved, so have the mice. Design modifications have most recently been aimed at making the mouse more ergonomically sound so that long term use won’t cause a repetitive stress injury, or worse, carpal tunnel syndrome. Changes include a “vertical mouse” featuring a scroll wheel and buttons on the right so the wrist doesn’t have to twist, and a mouse with the tracking ball on the right side of the mouse as opposed to the bottom, preventing the need to push down on the mouse in order to move the pointer on the screen. Despite these unique characteristics, all mice in production since 1984 possess the same “affordable” and “mass produced” qualities of the Apple mouse. Even though Apple refused to adopt any of these ergonomic trends, the popularity of their products remains unprecedented.”

Narrator: “In the past, some of the only competitors for the computer mouse were the joystick and lightpen. However, both of these alternatives couldn’t even come close to the mouse in terms of efficiency and accuracy. That was in the 60’s and 70’s. Today, both the touchscreen and trackpad prove to be worthy opponents, capable of dethroning this virtual vermin. For now, these technologies can be seen being used simultaneously, based on consumer preference. But the question remains: will the mouse become obsolete in the near future? Could the trackpad or the touchscreen become the preferred technology? It all remains a mystery to be decided by the consumers. In the present moment, the mouse, touchscreen, and trackpad live in civil disharmony, providing consumers with a wide range of choices to interact with the content on their computer screens.”

Narrator: “This brings us to the present, left only to wonder what is in store for the mechanical rodent that its designers affectionately called “the computer mouse.” There is no way of knowing if the mouse is soon to be a retired piece of computer nostalgia. The widespread influence of the mouse on personal computing and user-friendly computer interfaces remains relevant to this day. And to think, it all began with a young researcher at Stanford, like a disobedient student in class, distracted by the innovation of his own mind.

Why it was not picked: 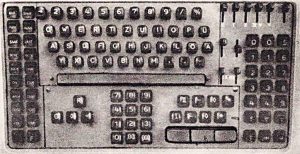 History: The keyboard was one of the first ways that humans and computers interacted. Typewriters had already been around for over half a century, and it so it made sense to transfer that technology over to computers because it was something that most people were used to already. In 1956, MIT started to experiment with keyboards that would have direct inputting on computers.[1] In 1962, the Keyboard Model 33 from Teletype corporation becomes the first marketed and sold computer imputing device for microcomputers.[2]  By 1964, I.B.M. created specialized command keys like esc, ctrl, and alt.[3] They improved on their keyboard adding the arrow keys, page up and down, Enter, and others in 1971.[4] Eventually, computer companies made their keyboards to work with the mouse, and have them be partners in human computer interaction.