In the past week the main work our group has been involved in is the inputing of the diaries into the Omeka site. Following the trend of struggle I have had with Omeka this semester everything went along great till there was a glitch.

This week we realized that while we had all been uploading the site we had forgot to officially agree on a standard for the titles of each item. Realizing this we sat down last class and made a decision how to label each item and made sure that each group member was aware of the standard. The only issue was that each of us had to go back and manually edit each item for the small formatting mistakes. In particular I forgot to add a comma after the date and had to manually go back into over 100 entries and add the comma. While tedious I am glad we realized it now and not at the very end of the whole project.

Another issue was that we did not set up the path correctly for connecting images to the site. So half of the images we uploaded had to be uploaded again after we sorted this out. Again an irritating moment. Other then these two hiccups though the uploading process has been going along great. James finished imputing our largest diary and other diaries are close to completion. Other group member have been working on completing our summary page and Gordon page throughout the week and we are working on changing some of the visuals on the site to improve the quality of the site.

When as a group we started to upload Pvt Gordon’s diaries to our website we made a important discovery. It turns out that both diary 3987 and diary 3983 claim to take place during the same exact time. Each diary claims to end on March 18th 1864. Now there are of course a number of reasons this is impossible. Other then the obvious question why would he keep two diaries? The two diaries have conflicting content and conflicting days of the week for the apparent same date.

To try and figure this out Alex figured out that diary 3983 started on Tuesday November 10th, by using a calendar application he was able to confirm that November fell on a Tuesday in 1863 so diary 3983 was in fact the diary for November 10th- March 18th. I started to do some looking into diary 3987 which claimed to go from July 10th 1863- March 18th 1864. What I found was that July 10th did not fall on a Wednesday as the diary claimed.  In 1863 July 10th actually fell on a Friday, however in 1861 July 10th did fall on a Wednesday .

Originally we as a group was convinced that diary 3987 was the correct diary for 1863, this was because the diary actually had an old label on the back that said the diary went from July 10th 1863- March 18th 1864. 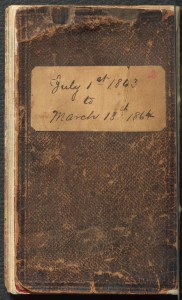 Another reason we were very convinced was that the first page of the diary also had 1863 written on it. We first figured that it was Gordon who included the year because the numbers looked very similar to his numbers. However under closer inspection the numbers for the year are slightly different then his. 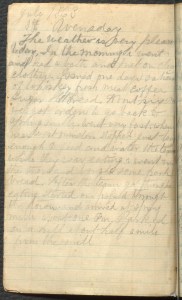 When we realized that these two diaries were so mislabeled I realized we needed to check the other diaries just in case those also got wrong dates attributed to them. (I am currently in the process of checking those now.) I am still unsure why this label was ever attached to the diary when the year is clearly incorrect or why someone wrote into the diary. However this process has reminded me of the danger when you assume that sources you receive all have the correct data. Thankfully we caught this, however mislabeling and incorrectly categorized dates are a big issue in researching especially when you assume that all the information is correct.

This past week our group working on the Stephen W. Gordon diaries has been focusing on finishing the actual scanning of the diaries. Mostly this has involved a lot of time working in the digital archiving lab. Suzanne Chase has been incredibly helpful in answering our questions on scanning and how to properly handle the diaries.

For me personally scanning has been a really interesting act. Getting to actually pick up the diaries and flip through them. When I first started scanning this week it was also a little daunting realizing that what I was scanning and how I scanned it would be how the public viewed these diaries. It made me think more on how each scan looked and working to try and make sure that every page was as clear as I could get it and things were not as cut off. In the end though when I got to flip through the diaries and read what Gordon did on that particular day years ago it was such an awesome moment for me.

Since the project started I have also had an complicated and struggle filled relationship with Omeka. This has involved meetings with quite a few people and lots of testing out new ideas. It also included a short but spited battled with FileZilla that is now happily resolved. However I will save the full depths of the Omeka struggle for my presentation tomorrow.